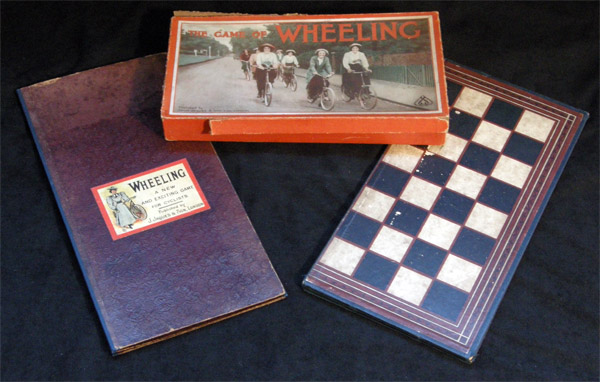 This is one of the old all-time classic English games. The date of the game (1896) comes from Dan Gindling's "Bicycle Collectibles", though Caroline Goodfellow vaguely ascribes it to the first decade of the XXth century (see bibliography here).

As you can see, there are at least three different editions of the game.

(a) The one on the left is the one you are most likely to find (let's call it the "canonical" version).

(b) The one on the right has chess and halma boards on the back and might have been included in a combination box with other games.

(c) The boxed edition is more modern. Though I cannot date it precisely, I would say it is from the first fifteen years of the XXth century. 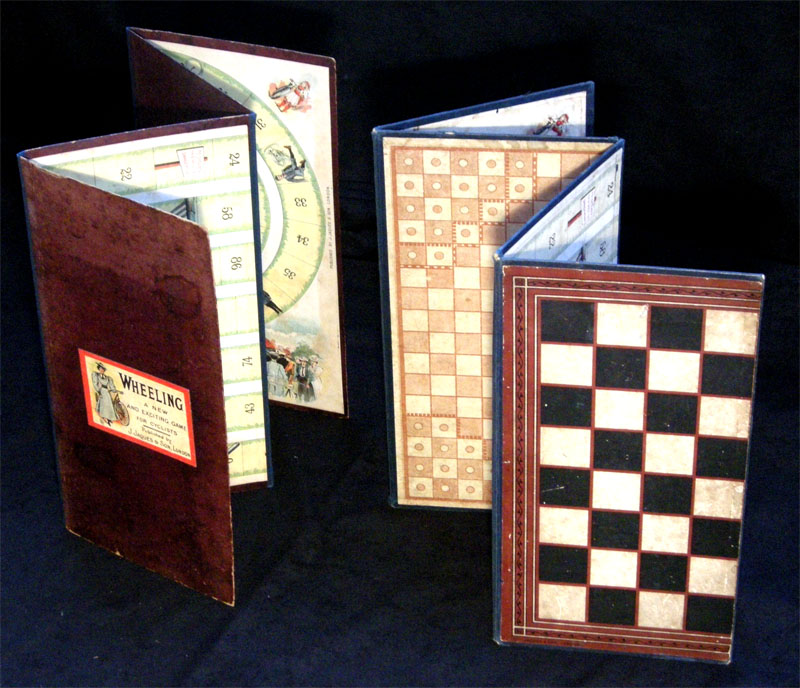 If we look closely at the two bigger boards, we find that although both boards are by J. Jacques & Son, the printing is finer on the "canonical" version of the game. On the other hand, the board in the boxed edition is smaller and the drawing is much coarser.

There are also (at least) three slightly different versions of the rules (see below). 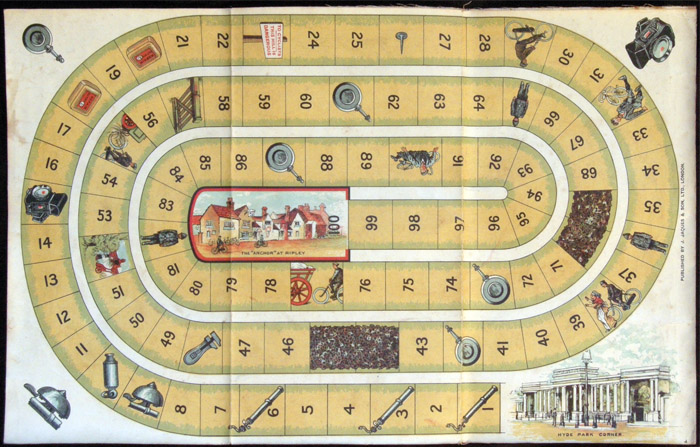 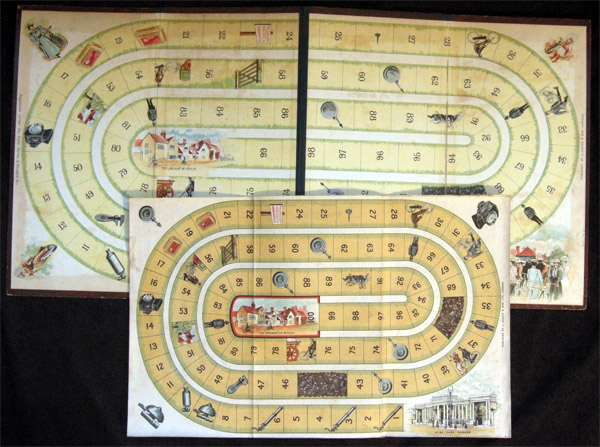 Compare the board sizes.

The game represents a race from London to the Anchor's pub at Ripley.

In case you did not know, "Ripley is a village in Surrey, which grew on the main A3 road from London to Portsmouth. [...] In the 1870s cycling also became a popular activity in the South of England and Ripley was a convenient distance from London so that many cyclists would stop there for a break at the Anchor Inn. Sisters Annie and Harriet Dibble encouraged the cyclists so much that, in some years in the following decade, their visitors book was signed with over 7000 names - all arriving on penny-farthings or boneshakers." (That was from the Wikipedia)

Or else, "Ripley was once a mecca for cyclists long before the motorist took over.  It was far enough down the old Portsmouth Road for Londoners to be able to ride out, have tea and then return home.  The 'Dibble' sisters dispensed tea for the cyclists and became so popular in their lifetime that when they died cyclists clubbed together and paid for a stained glass window in their memory to be placed in the parish church.   Annie and Harriet Dibble were kindly churchgoing souls who ran the Anchor Inn.  It was twenty five miles from the centre of London and the sisters knew exactly how to cater for ravenous cyclists.  Annie died in July 1956 and Harriet fifteen months later..... with them so did an era." (I found this information on a website called thegoodmoveguide.com, but sadly it is no longer online)

Or (update december 2019), "The section of the road [Portsmouth Road, South West of London, now the A3] between the Angel Inn at Thames Ditton and the Anchor Inn at Ripley became known in the 1880s as the Blue Riband, being regarded as the best kept road in the world. Cyclists even came from abroad to ride on it. The road remained dear to cyclists until motor traffic made it unconvivial." (Mc Gurn, James, 1987. On Your Bicycle. An illustrated history of cycling. London : John Murray, p.155)

Or, for a longer description (which even includes a mention to this site) check The “Mecca of all good cyclists”: Ripley Road, by Carlton Reid, a great article on the Ripley Road, which is part of his (highly recommended) book "Roads Were Not Built For Cars". 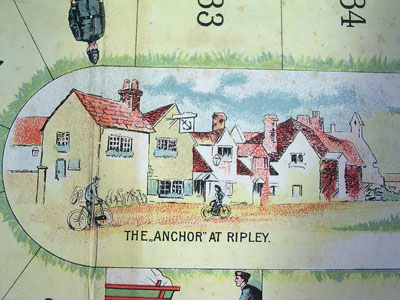 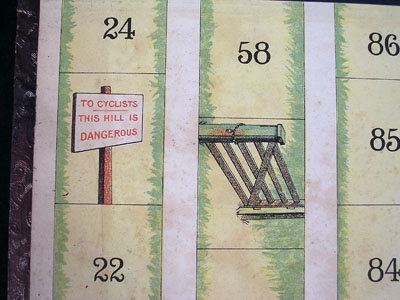 Differences between the two big boards:
the printing is coarser on the game with the Halma/Chess boards on the back (right),
though the drawing is the same 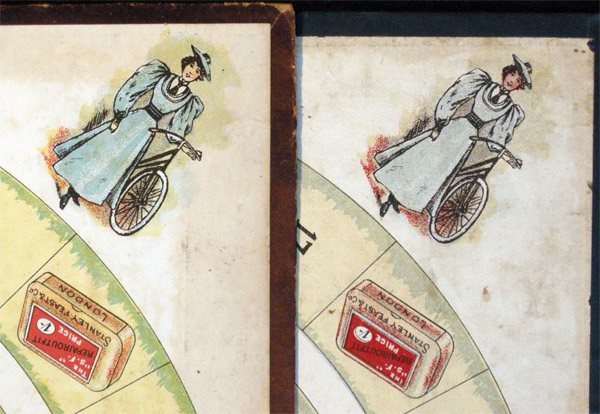 Differences between the boards: notice the coarser drawing of the fallen cyclist on the smaller (later) board. 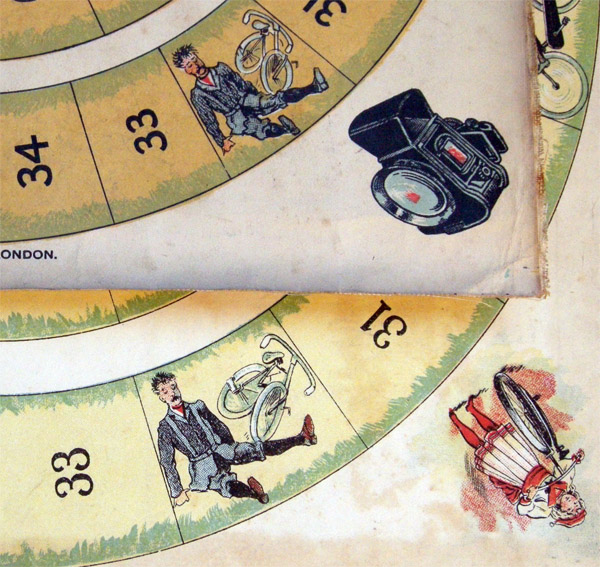 Hyde Park corner only appears on the later board 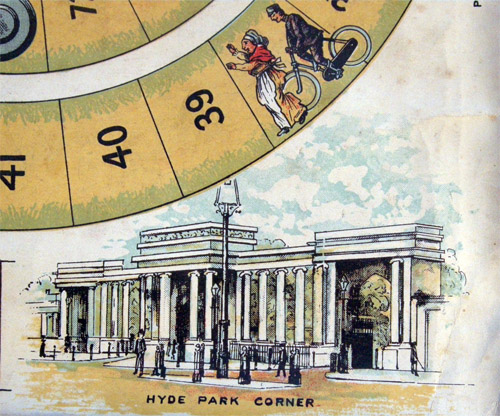 I got these tin riders with the chess/halma-backed board. They look quite like the ones of J.W.S&S' Cycling 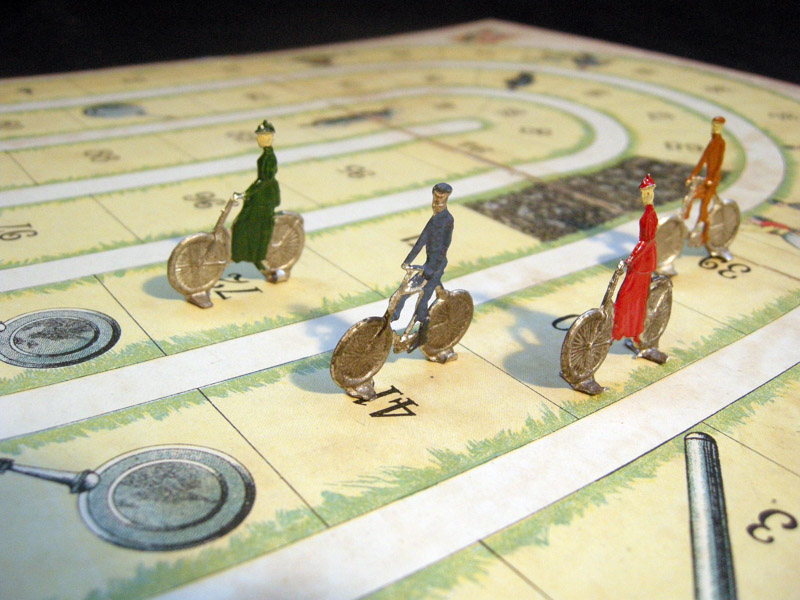 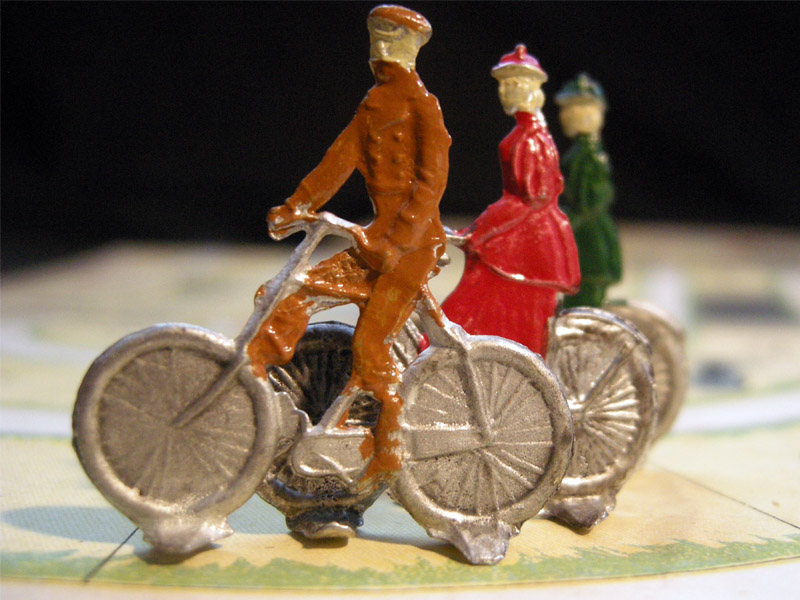 These are the riders included in the boxed version. Again, coarser. 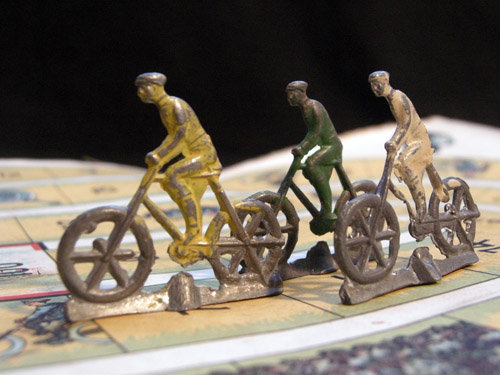 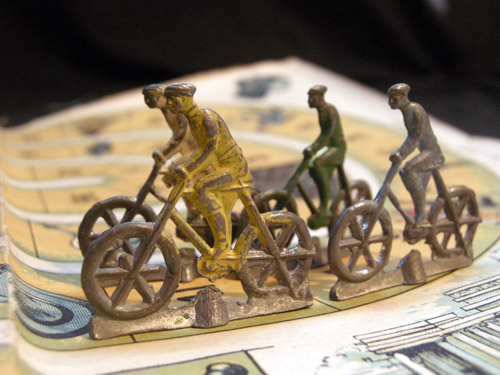 These are the rules that came with the Halma/Chess-backed board. (The hand-writing corrections were already there). 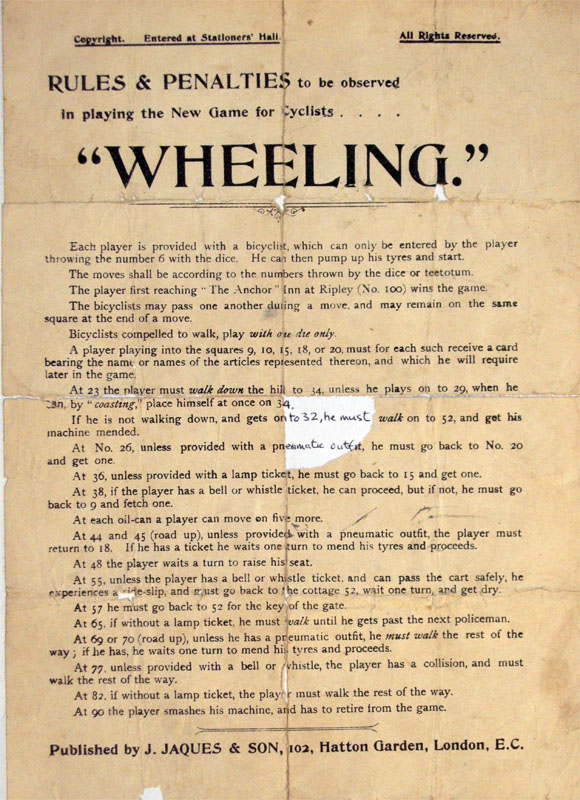 These rules were first sent by Neil Bloomfield.
I have occasionally seen them for sale together with the "canonical" version of the board. 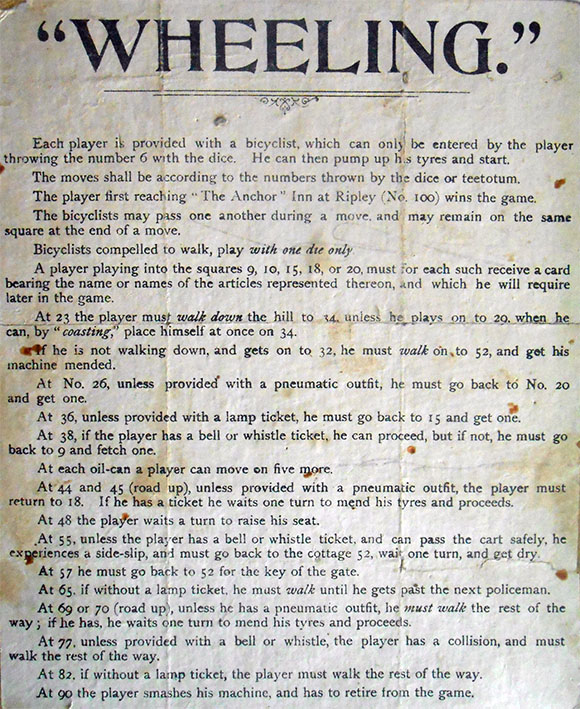 These were sent by Jerry Mortimore, who has a boxed set, similar to the one pictured above, but with a grey box.
They are similar in everything to the ones sent by Neil except for the address of the J.Jacques & Son.
My guess is that this is a newer address, but it is just a guess (anyone can confirm this point?) 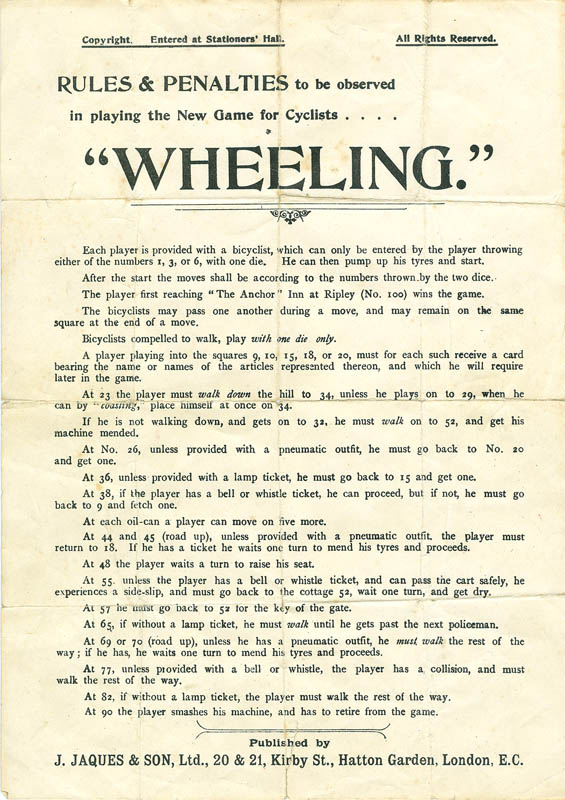 There are a couple of interesting differences in the first two paragraphs between the first set of rules and the other two. In the first version:

(b) the second sentence reads "The moves shall be according to the numbers thrown by the dice or teetotum".

Both the very Victorian teetotum reference and  the fact that you enter the game more easily (three chances out of six instead of one) make me think that the first version of the rules is older.

This is confirmed by the revised version of the rules (included in the red box), which also enters the game with 1, 3 or 6.More precisely, after throwing 1, 3 or 6, the player "can then pump up his tyres and start with the number he has thrown". Notice that in all cases the player will fall on a square with a pump. However, the pump does not play a role in the game (not to be confused with the "pneumatic outfit" at squares 18 and 20).

Interestingly, in this modern version, we do not find any longer a "bicyclist" but a "cyclist".

The rest of the rules, as you can see, are similar, though some points are more clearly explained in the revised version. 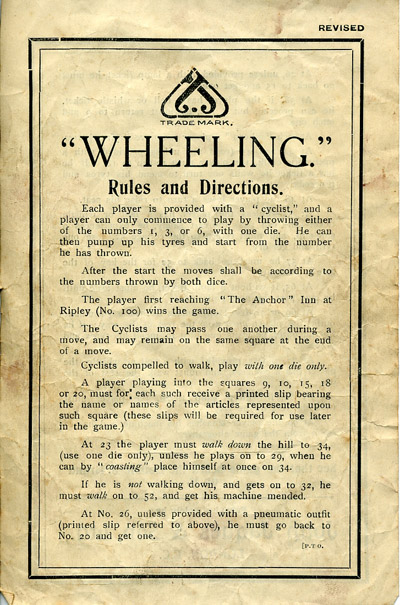 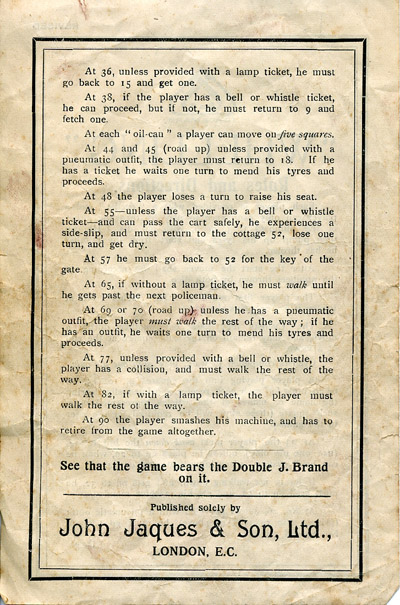 Here is another set of rules sent by Jerry Mortimore (a great Wheeling collector). It belongs to a luxury edition of the game. He writes: "The board is much thicker than another board I have – 4mm thick instead of 1mm thick. The board is leather backed and embossed in gold. The playing pieces, etc, are in a wooden box with a sliding lid. There are four metal playing pieces, two gentlemen and two ladies."  What is interesting here is the a  Jacques & Son games' catalogue, in which we see that there were 5 different versions of the game: 1s, 2s 6d, 3s 6d, 5s and 7s 6d (pre-decimal coinage, of course). As Jerry remarks, In the 1890s 7/6 was a lot of money, a week’s wages for a tradesman. 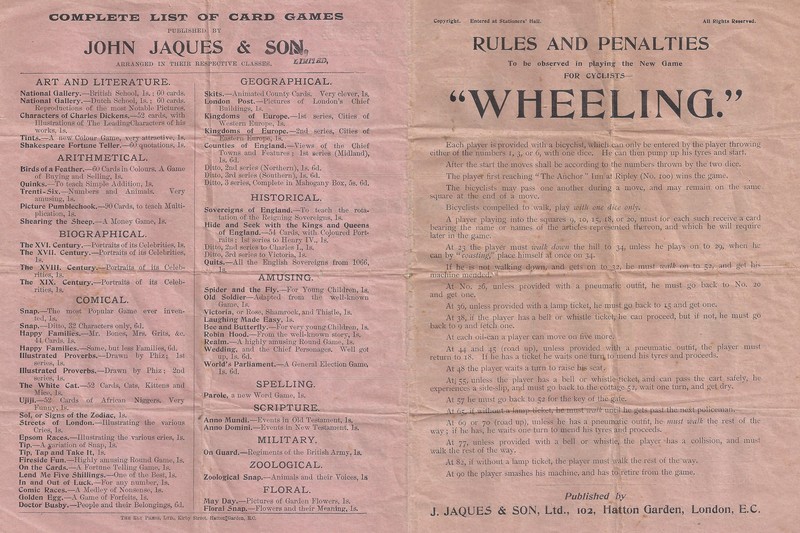 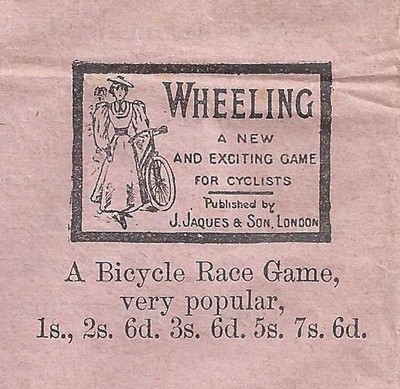 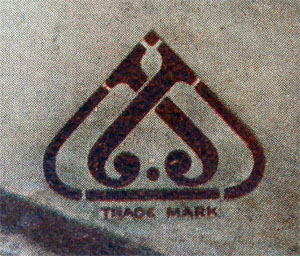 Bell-Whistle, Lamp and Pneumatic Outfit. Though referred to as "cards" in the older rules  and as "printed slips" in the revised rules, they are quite similar in both versions of the game and, as you can see, are better described as "printed slips". 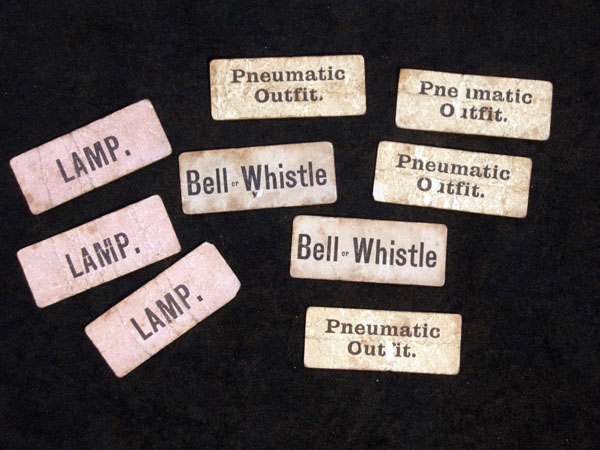 Here are a couple of found pictures with some elements I do not have: the box and some more lead riders. 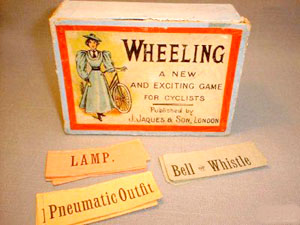 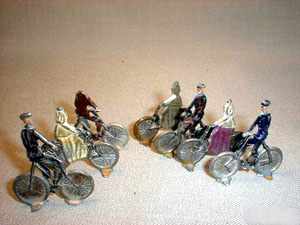 Compare this game to  J.W.S&S' Cycling.